Something I’ve been wondering for a while is why states that are very close and fairly similar have such different quality of state government. Namely, Minnesota and Iowa have state governments that are generally regarded as good or at least competent but Illinois’s state government is, to put it mildly, garbage.

I think a potential explanation is that Minnesota and Iowa have state capitals in their largest cities. The state capitals of Minnesota and Iowa (St. Paul and Des Moines) are also the largest population centers of the state and arguably the best metro areas to live in. Springfield, on the other hand, is no Chicago. This discrepancy between the largest city and the capital city could affect the quality of the government in a variety of ways. It might limit the pool of individuals who want to work in a state’s government and restrict contact with policy advisors, a smaller media market might mean less incentive to expose scandals, and it may be harder for state residents to travel to meet government officials or protest. In this post, I will investigate whether my conjecture is born out using rankings of state governments and city-level population data.

Researchers at the Harvard Kennedy School also thought a similar link would exist between the amount of corruption in state government and the average distance between each state resident and the capital (Campante and Do, 2014). You can read a NPR summary here or download the full paper here. They confirm their hypothesis using several different measures of corruption and distance. They also use an interesting instrumental variable to identify the effect of distance from a state capital specifically, which lends additional credibility to their results.

I will use a slightly different outcome metric, government quality broadly defined, and will look only at population of the capital city relative to the entire state, not the geographic distance. Mainly the metrics I use are much easier to calculate, but I think the effects of a low-population capital should manifest in measures besides corruption as well. Ignoring geographic distance is potentially problematic if some states have capital cities adjacent to large, non-capital cities (such as St. Paul and Minneapolis). However, that scenario is usually rare and disregarding distance also removes confounding variables of state size and shape.[1]

My measure of government quality, partially discovered because I was researching grad school rankings, is the US News State Government Rankings. There is an overall ranking of each state from one to 50 and the four subscores that make up the ranking:  fiscal stability, budget transparency, government digitalization, and state integrity. Note the best state is ranked one and the worst is ranked 50. The US Census Bureau provides population estimates of all US cities. I will also use state GDP and population totals as control variables.[2] The code and data are available on my GitHub page here.

I ran linear regressions of government rank on the percentage of each state’s population living in the capital city, state population (in 100,000s), and state GDP (in $100,000s). I looked at the overall rank, the average of each subscore (US News weighted fiscal stability higher than the others in their ranking), fiscal stability, and state integrity. Fiscal stability is, in my opinion, the most important measure of government quality and state integrity is a measure of corruption, which can be compared to the results from Campante and Do (2014). The results are shown in the table below. 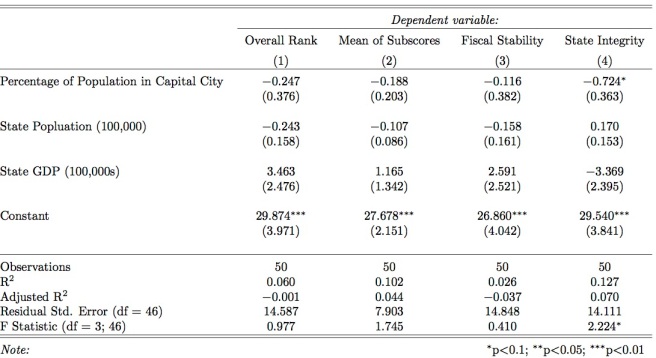 However, I think traditional notions of significance might not be appropriate here. A sample size of 50 is not ideal for any regression, and the small number of observations certainly increases the standard errors. The “sample,” however, is the entire population of the 50 states. One could argue that the standard errors do not really matter in this case. Repeated draws of 50 states will produce the exact same result each time. I certainly have uncertainty in the rankings from US News, and I would not be surprised if a new ranking of the states had them in different positions. That kind of repetition is not really what the central limit theory is about though, so I’m not convinced that the lack of significance is itself significant. I should note also that one could consider counterfactual samples of worlds where states have different capitals, and potentially different rankings as well. Under that perspective, we can only observe a single sample of size 50 from an infinite population, and the estimated coefficient’s significance is relevant to whether the true coefficient in that population is zero or not.

States with capital cities that have a large percentage of their total population do have higher-ranked governments than states with smaller percentages. My results are consistent with Campante and Do’s study, in particular the state integrity ranking has the largest and most significant coefficient of all the subscores. I do not really know how one could fix this problem. Certainly, state capitals can be moved (Iowa’s capital used to be Iowa City before the capital building was accidentally burned down), but I expect multi-year incumbent politicians (e.g. most politicians) and residents of the current capital city would be extremely resistant to moving the statehouse. One could try to improve commuting times to the capital city, or something along those lines, but those policies probably aren’t significant enough to address the crux of the issue. Unfortunately, this problem might be one that individual states are stuck with unless they want to take the drastic step of relocating their capital.

[1] I also confirm my results by using metropolitan statistical areas, as defined by the Census Bureau. This accounts for capitals in close proximity to other large cities. However, several capitals are not MSAs and several MSAs cross state lines. Thus, I just use the population of individual cities.

One thought on “Capitals and Good Governance”